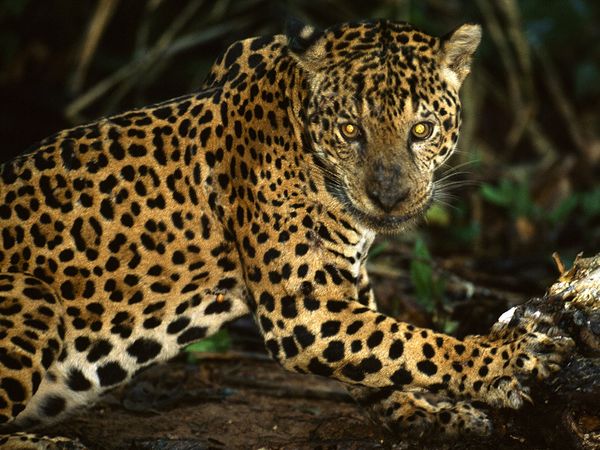 Jaguars are the largest of South America's big cats. They once roamed from the southern tip of that continent north to the region surrounding the U.S.-Mexico border. Today significant numbers of jaguars are found only in remote regions of South and Central America—particularly in the Amazon Basin.

Unlike many other cats, jaguars do not avoid water; in fact, they are quite good swimmers. Rivers provide prey in the form of fish, turtles, or caimans—small, alligator like animals. Jaguars also eat larger animals such as deer, peccaries, capybaras, and tapirs. They sometimes climb trees to prepare an ambush, killing their prey with one powerful bite.

Most jaguars are tan or orange with distinctive black spots, dubbed "rosettes" because they are shaped like roses. Some jaguars are so dark they appear to be spotless, though their markings can be seen on closer inspection.

Jaguars live alone and define territories of many square miles by marking with their waste or clawing trees.