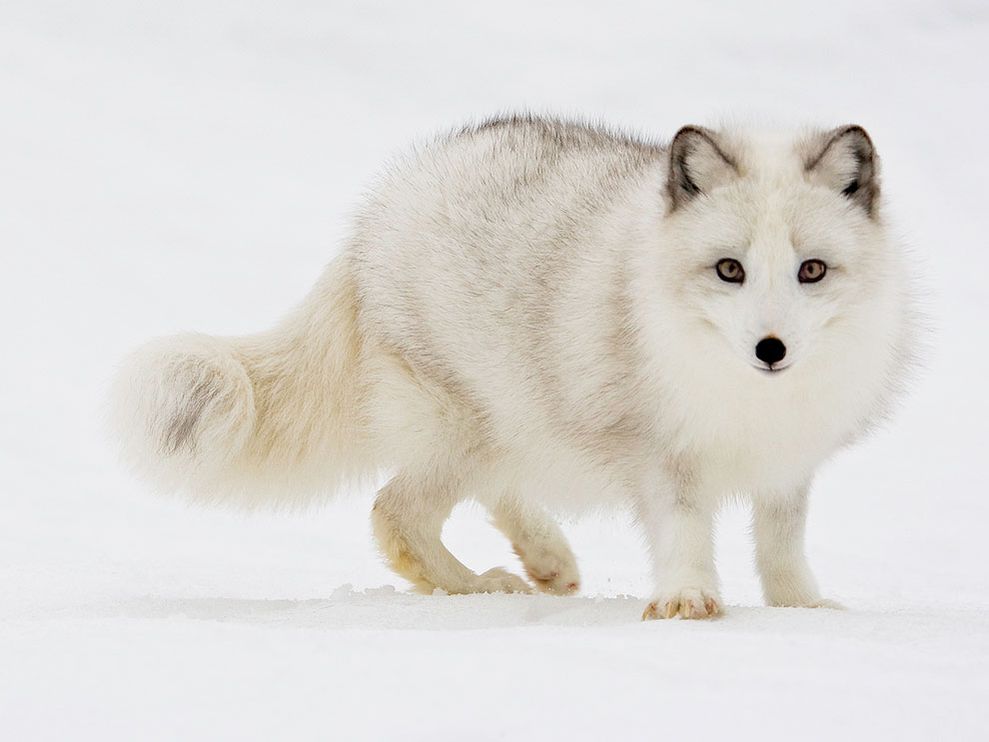 Living in some of the most frigid conditions on earth, the hardy Arctic fox can survive polar temperatures of minus 58 degrees Fahrenheit, sometimes tunneling into the snow for shelter. The fox’s fur turns from brown to pure white in winter to serve as camouflage in the snow. It feeds on small animals by pouncing on its prey and punching through the snow to catch its meal. When prey is scarce, the fox follows the Arctic’s foremost predator, the polar bear, to scavenge for leftovers.

From:  For additional information, please check out

From the Dancing Fox - Arctic Folktales

From: The Dancing Fox - Arctic Folktales, Edited by John Bierhorst

And now I am going to tell you a story from times long ago. It is said that there was a boy lying unconscious on the sand. After a while he rose up and began to walk on the beach.  He did not know where he was.  He walked on and on, day after day, sleeping at night on the ground.

Winter was coming, and the boy found little to eat, only a few roots and berries.  He became weaker, and at last one day he sank down in a clump of grass, saying to himself, "I can't go any farther."

At that moment he saw a red fox walking toward him.  When it came close, the boy took hold of it and began tapping its nose on the ground.  The fox raised its head, the skin of its face folded back, and the fox's face became the face of a man.

Then the fox spoke, saying, "To the north only a short distance up the coast are many people.  Let me take you there."

They started off at once, and when they arrived, the fox said, "Let me go ahead.  You wait here."

While the boy waited, the fox ran into the village and shouted to the people, "Your enemies are coming!  Many more than you!  And they're almost here!  Leave at once!"

The people were terrified.  "This is the first time an animal has ever spoken to us, " they cried.  "We had better do what it says."  Without stopping to pack their belongings, they all ran out of their houses, dashing through windows and doors with the speed of a shadow cast by the northern lights.  They were never heard from again.

Calling to the boy, the fox said, "Everyone's gone now.  You can come."  Then the fox  told him to pick out the best place he could find, and for a while the two stayed together and had an abundance of everything, skins to sleep on, meat to eat, everything that could be desired.

In the evenings the fox would entertain the boy.  It would dance on its hind legs, going round and round, singing, "What a clever person I am!"

Then, when time had passed and the boy had grown older, the fox told him of a couple living inland with an unmarried daughter.  "You are a man now, " said the fox.  "You must have a wife."

Then the fox walked inland to the house here where the couple lived and called for someone to come out.  A young woman appeared.  As she stood there, astonished, the fox asked her if she would like to marry the two sons of a rich man.

"How can they be so rich as to send a red fox?" thought the young woman.  But said she would go inside and ask her father.

When the father came out, the fox said the same thing to him:  "Won't you marry your daughter to the two sons of a rich man?"

"My daughter can do what she wants," replied the father.  But at the same time he was thinking, "how rich those two men must be to send a talking fox to tell us!"  Then he told his daughter to follow the fox.

And so she did.  When she reached the village that the people had left, she saw only the young man.  There was no one else in any of the houses.  She and the young man were married, and the fox danced round and round on its hind legs.  But the young woman knew that the fox had not told the truth.

The three of them lived together for a time.  But at last the stored meat in the village was all used up, and the many skin robes that had once been fine were now soiled and torn.

Then the young man made preparations for fishing.  He caught different kinds of fish whenever he could, and in this way he and his wife, though poor, were able to live.

The fox, however, did not care to be poor and went inland to live somewhere else.  When the fox came to the house where the young woman's parents lived, it stopped in and said, "There is no need to worry about your daughter.  She is rich.  She has everything she wants!" And it danced round and round on its hind legs.

From time to time the fox would pass by the old couple's house and would always stop in to say, "Your daughter has much more than you have here.  Your daughter is rich!"

And that was the beginning of red foxes knowing how to make tricks against people and fooling them.

There, I have nothing more to tell.